Since September of last year, my day-to-day attention has been focused on Temporary, which we call a 'sandbox for practice-based research into experimental interactive formats’ in Helsinki.

I’m one of the initial organisers of the project, which we started to collect different approaches to culture production, specifically focusing on participatory, trans-disciplinary events. Rather than creating another art space or project space, our goal is to design a framework for cultural experimentation that attempts to decentralise the administration and responsibilities usually needed for such efforts.

This framework, which we are calling Biathlon (after the sport which combines two very different skills, which we see as a metaphor for trans-disciplinary culture-building), is being developed on the fly at Temporary. Temporary is a 100m2 room in the Kallio district of Helsinki that we are trying to keep open 24 hours per day, 7 days per week for collaborative, creative use. (We’re about halfway to that goal, though if you discard the wee hours of the night, we’re actually a lot closer. )
We wanted to address some of the problems that were dissuading us from professional culture production, such as the endless deluge of administrative work required for fundraising, producing and marketing. We also wanted to find a way to equally value all levels of participation in trans-disciplinary activities, whether one is attending a workshop as a participant, facilitating one's own art project, or simply mopping the floor. 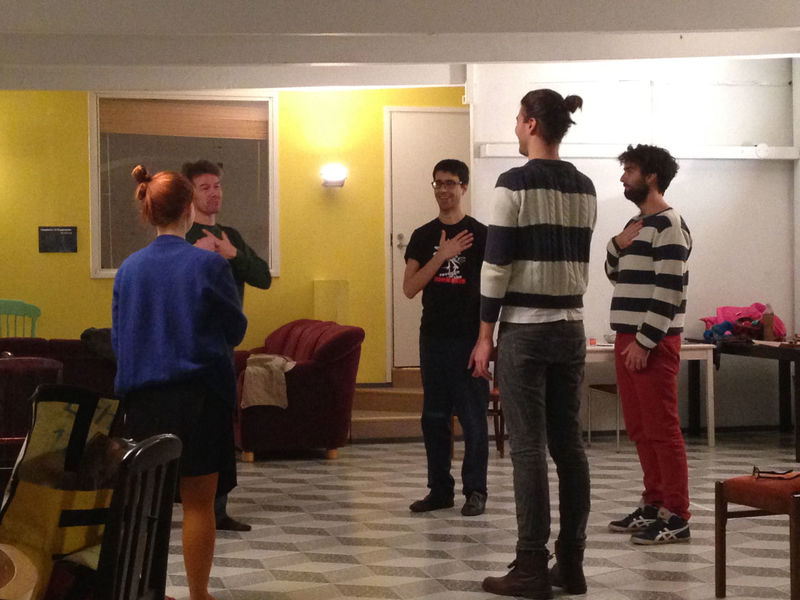 Voicing Body Parts workshop, December 2016
Temporary operates via three core principles:
What sorts of activities happen at Temporary? Over the past eight months, there have been numerous ‘experiments’  (we request all proposals be pitched as experiments, rather than as mere 'events’), which have explored areas such as sound and music interaction, amateur taxidermy, DIY electronics building, pinhole camera construction, permaculture space design, silent food eating, game design, Elvish/Tokein language study, and cardboard furniture construction, to name a few. All of these experiments were proposed by the public, who become not just visitors to the space, but part of the administration -- across all levels of production. 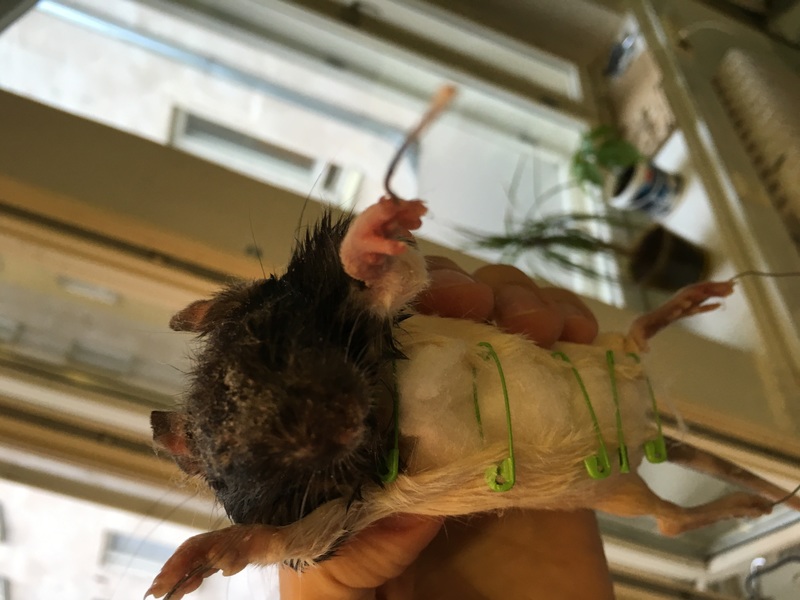 Some amateur Taxidermy, September 2016
One of the things I believe makes Temporary unique (at least in the context of grassroots culture venues) is the way it attempts to merge the social with the technical, or the actual with the virtual — while avoiding the trappings of social media (aka ’slacktivism’, Like-button culture, and so on). Our website is the centre of the virtual side, where users can share their ideas, collaboratively develop proposals, and interact with each other. But Temporary is fundamentally rooted in the physical place, where the events happen; you have to actually show up, and your participation across multiple activities accumulates, not just in the collection of the Temps currency but in the social capital you build with others.
Helsinki is currently very active with urban culture projects that encourage participation, especially across subcultural and professional boundaries. I am personally very happy to be contributing to this with Temporary, although it remains to be seen what will happen in the future - if we will find a way to keep paying the rent at Temporary without commercial backing (currently, two of us are supported with working grants from the Kone Foundation, which allows us to do this), or if we will manage to develop the Biathlon concept into something that could be used by others, beyond Temporary. 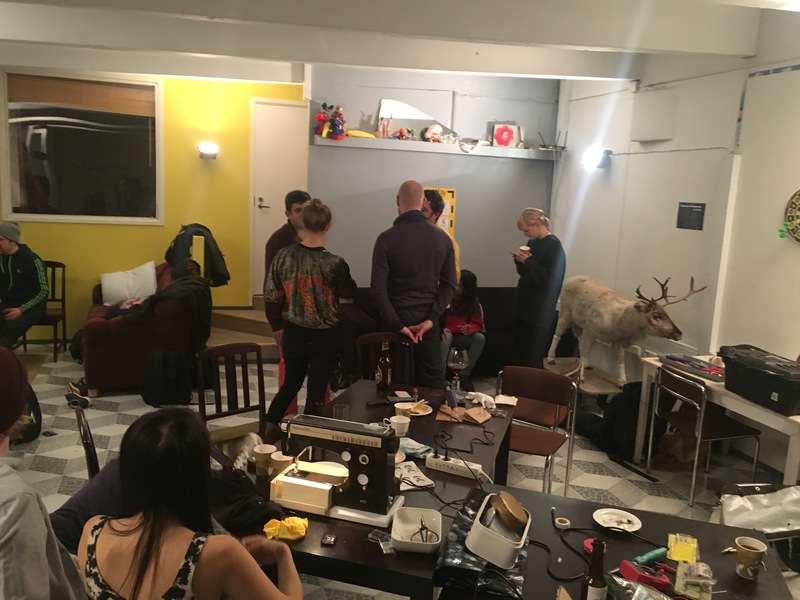 Trashlab, December 2016
We are committed to providing a space for non-commercial, non-monetised and trans-disciplinary experimentation, which is needed. I do not see Temporary as a tool for the startup/creative industry scene, nor as a site of production for the art world. But I don’t see it as opposed to these structures, either -- or to any others. It is hopefully a parallel process, one alternative among many, where flexible, responsive formats for cultural dissemination and research can emerge without being weighed down by existing formats.
While it’s impossible to have a truly decentralised culture space in this context, since the physical place itself is a centre, we hope that the administrative, curatorial, and operational mechanisms of Temporary are distributed, and we chose blockchain storage to represent this. The Temps currency is built on top of the Ethereum blockchain, with all visitors receiving a simple NFC-based ID card, which they can use to "check in” (using a small, Raspberry Pi-powered touchscreen kiosk) and receive their Temps at each experiment or Open Time session. While this may seem contradictory at the moment (since it requires a separate, centralised database to add meaning to the Temps blockchain ledger), we intend to expand the Biathlon model to incorporate other cultural initiatives; then, the blockchain will serve as a site of digital interaction, mirroring the actual, social correspondances.
Yet we also hope that this technical/geek aspect of Temporary can be mostly invisible to those who are not interested; that there is nothing intimidating about showing up and being part of it. We have over 350 registered users, of which 257 have participated in at least one experiment and 220 of them hold an ID card. The check-in procedure is as simple as getting on the subway, if not easier. On any given afternoon, Temporary is filled with a mix of people working on their own academic, creative or freelance projects (during Open Time); on any given night, you may find an entirely different mix of people participating in more directed experiments. 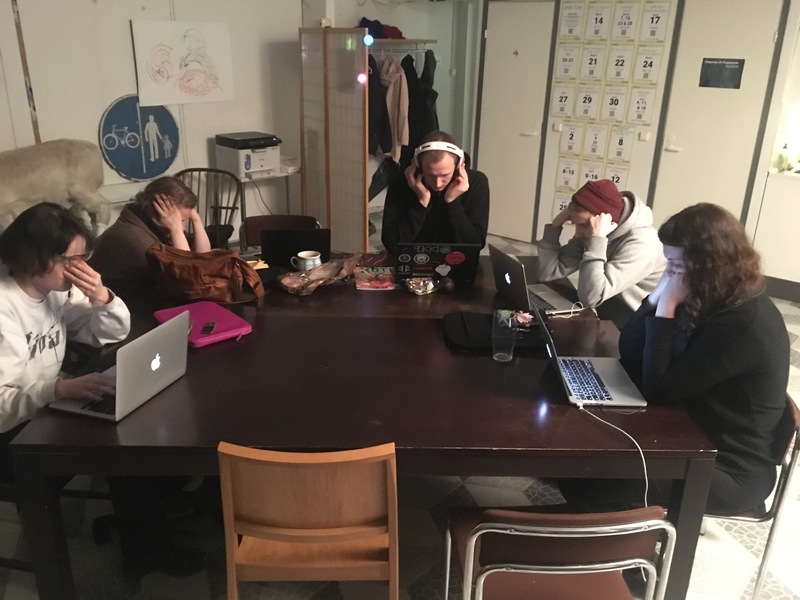 If you would like to donate to Temporary, please see our info page about how to donate with Ether or Bitcoin. And if you are in Helsinki (either residing or just passing through), then I encourage you to visit -- or even to propose your own experiment.